As a meditation teacher, I get this question a lot.

Yoga nidra is translated from Sanskrit as “Yoga Sleep”.

On the one hand, it can be considered a form of meditation. And yet, on the other hand, it’s totally something else! Truth be told, even reputable meditation teachers sometimes disagree about what to call it. So let’s dive right in and take a closer look at this very special practice.

In a nutshell, yoga nidra is a practice where you come to rest on your back in savasana and let the teacher guide you into the states of deep sleep combined with conscious awareness, deeper than you ever thought you could go.

If you reread the last sentence, you might find yourself wondering: “Wait a minute Elena, how on Earth can deep sleep and conscious awareness co-exist? Aren’t they pretty much the exact opposites of each other?”. This is exactly what yoga nidra claims to prove: that these opposing states can actually be experienced at once, and that this combo can teach us to recharge and replenish our resources better than any other method out there.

If you find it shocking, read on and check out the research links I’ve provided at the end of this article. 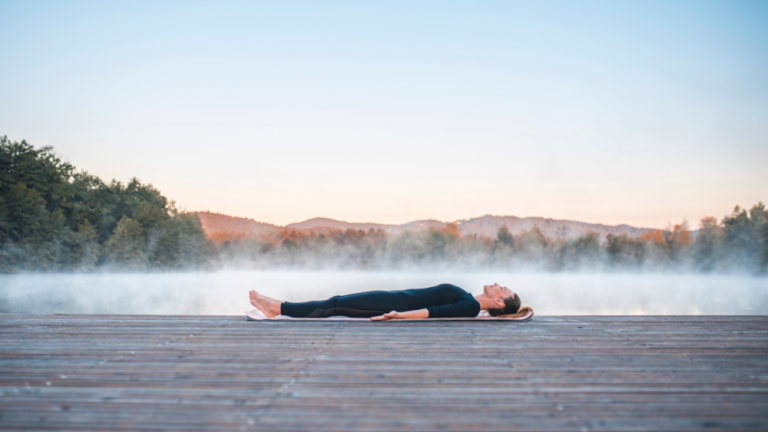 One of the core yoga texts Mandukya Upanishad happens to also be one of the oldest sources mentioning yoga nidra. It states that yoga nidra results in conscious awareness of the deep sleep state. This state is called prajna. Interestingly, the word “prajna” is also used to refer to the highest and purest form of wisdom, intelligence and understanding.

I would add that not all meditation styles require concentration on a single focus, and there are also traditions that are open monitoring meditations. Under this definition, yoga nidra could also be considered to be one.

In my opinion, what really makes yoga nidra stand apart from other meditation styles, is rather the signature brain waves patterns observed in meditation practitioners.

In metta, or loving kindness meditation for example, the experienced practitioners display an abundance of high frequency gamma synchrony and activity. These brain waves are associated with high performance, effortless concentration and compassion states.

In yoga nidra however, researches have been observing a descent into deeper and deeper states associated with sleep. From beta brain wave activity of our day-to-day lives, to relaxed alpha states, to dreamy theta and finally, into super slow brain wave delta states which are typically observed in good sleepers at a point of most replenishing stage of the sleep cycle.

If you know a thing or two about brain waves, I’m sure you realize how big a thing it is to claim that during a yogic practice anyone could ever experience coexistence of delta brain waves and conscious awareness. I was ready for this reaction, so here’s a proof: at professionally equipped laboratories a yogi Swami Rama demonstrated conscious entry into delta wave sleep state through yoga nidra, whereas his disciple was able to demonstrate delta and theta waves even with eyes open and talking (research link below).

This observed difference in the brain activity between f.ex. Metta meditation and yoga nidra, is quite impressive. Knowing about these differences is a good enough reason to create a whole new category for yoga nidra as a practice. If you’ve ever experienced it as a practitioner, I don’t have to tell you that “deep relaxation” doesn’t even begin to describe it. Yoga nidra journey is so much more sublime, and a 45-minute practice can recharge you more than 3-4 hours of sleep, making you feel like you’ve just returned from a restful vacation.

One more word that is often used to describe yoga nidra is pratyahara. Pratyahara is one of the 8 limbs of yoga, and means “withdrawal of senses”. Yoga nidra is definitely a practice of pratyahara as in the very beginning of the practice, you are instructed to dissociate from all your senses, except for hearing. That way the auditory channel is the only one that remains open in order to let the instructions in, and the mind of the student can take refuge from all other sources of sensory stimulation for the time of the practice. It’s another component of the deep yet conscious sleep experience that yoga nidra offers.

Want to know more about yoga nidra? Or just want to experience its benefits?

If yes, start by downloading your free yoga nidra recording here. With this guided class, you’ll be able to experience an exquisite sense of calm and tranquility in your body and mind within less than half an hour.

Are you a yoga teacher interested in offering yoga nidra classes to your students? If yes, head over here and save your details so I can reach out when the next training opens up.

Training attention for conscious non-REM sleep: The yogic practice of yoga-nidrā and its implications for neuroscience research.